St George Versus the Ordinary Fear Of God

Went to the football on Sunday and took the girls to see Saints vs Souths. There was a fairly good turnout, but it was a strange day as it was Russell Crowe's first game after the takeover. 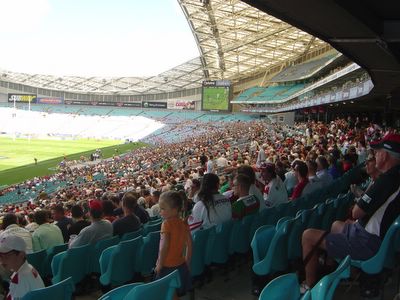 Whilst walking in to the ground and around to our seats, Saints scored a try in reserve grade and the ground announcer said "and its St George 12, South Sydney 8 on the ordinary fear of god scoreboard". WTF? I didnt quite catch what he said, but I had never heard the words "Ordinary Fear of God" uttered over a ground PA.

Then the conversion was successful for the try and the announcer said again "And its now St George 14, South Sydney 8 on the ordinary fear of god scoreboard". Again dismay at what was being said. Had Souths been taken over by Hillsong? Was Russell Crowe a Scientoligist ala Tom Cruise and was using this as an avenue to promote his religious beliefs? No, that wasnt quite right. It wasnt Russell's religious beliefs he was promoting, but rather his new band "Russell Crowe and The Ordinary Fear of God". Well done Russ, you spent your share of $3M to buy the Rabbitohs and you have a captive audience to sell advertising of your latest music projects.

And Russell made sure he did too, with the half time adverts heavily ladened with Russell ads for 1) his new album (My Hand, My Heart) and 2) his tour dates coming up in April. (I am sure he is coming to Newtown RSL soon!).

Now I am all for Russell and his mate Holmes a Court buying the Rabbitohs, but seriously, get some "real sponsors"! 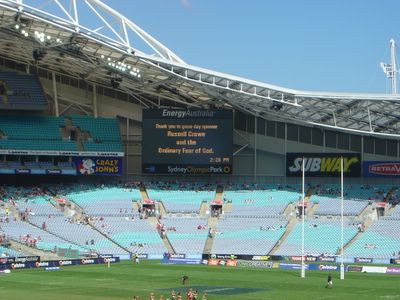 Clay
Nearly 40yo, married with 2 children, taking a life changing step and moving to the UAE for work. Will it be good? Will we come home? Only time will tell!